< Back to Historical Themes

SOLDIERS: 1980-1988
A standing army principle in navigating unknown terrain is always know your point of departure. If you lose your bearings, you can retrace your steps and find your course.
Relocating to the U.S. for art studies at Yale put me on unfamiliar ground and culture, an Israeli in America. And so I returned to my point of departure, thinking of my personal experiences.
In this series, I painted the people, courtyards, trees and hills of an interrupted homeland; the armies who fight the wars and the people that endure them; the delicate balance between the domestic and the military; and the violence when the two clash. There are no battle scenes in the paintings, yet the canvases are documents of war.
The paintings show the land and city and village from a soldier’s point of view, and the public spaces from the observer’s vantage. Some show camouflaged soldiers blending into the green and brown of terraced groves filled with olive trees that in peace provide food and shade and in war shadows in which to hide.
This was the Middle East of my own experience as a soldier. From a distance in time and place, I painted this for nearly a decade.

The authenticity of one’s art is what makes it universal. This concept has guided me throughout my career.

I arrived in New York in 1980, ahead of my studies at Yale. Looking back, it was this change that shaped my art.

Moving severed me from everything I had been attached to until then- the language, landscape, and culture.

I found myself on unsolid ground. In fact, I wasn’t on any ground at all. For the first time in my life, I lived in an apartment building, three floors up.

I tried to gain control of my new surroundings the only way I knew: by painting.
And so I started to paint from my bedroom window. I painted people as I saw them, elongated faceless shadows. I worked from a distance that was physical, cultural and emotional.
Andy, my wife, was American. She did her best to mediate the culture for me. Still, I craved connection to home. I bought a shortwave radio, an expensive indulgence at the time. Every night I searched the band for the frequency with news from Israel.

The same events from the ever-troubled Middle East were reported on the evening news too, but their tone was different. Perhaps also echoing lingering Vietnam discontent, Israeli soldiers were shown as aggressors.

Maybe this is what it looked like from outside. Only a few years earlier, I took part in defending my country during the Yom Kippur War. The experience of my friends and I had been one of extreme apprehension. The difference unsettled me further.

Gradually, I ventured out from behind my window to explore the New York art scene.

The art I saw in Soho galleries didn’t resonate with me– I didn’t recognize anything of myself in it. I understood that for my art to resonate with others, I would have to express my own identity, not erase it.
Where was I going with all these insights?

A standing army principle in navigating unknown terrain is always know your point of departure. If you lose your bearings, you can retrace your steps and find your course. And so I returned to my point of departure, thinking of my own experience as a soldier.
I reflected on camouflage, a military method borrowed from nature, where it serves both predator and prey. The duality persisted in art too, defining a shape by abstracting it.

Soldiers in formation also came to mind. In the landscape of the Middle East, squads moving at fixed intervals for safety among rows of olive trees and farming terraces created geometric patterns, a grid formed by man and nature.

These colors, patterns, shapes and other observations would all become recurrent design elements in this series.
I began painting soldiers in the landscape. using this theme to connect my past with my new present. This served both my artistic and personal processes, and would ultimately become a four-part series spanning nearly a decade.

When I finally started Yale, my horizons expanded. I was exposed to Renaissance, Impressionist and contemporary Figurative art. Around a year into my studies, the Lebanon War broke out.
I continued painting my soldiers. With new artistic tools from my studies and ideas from real-time news footage, I now had more ways of conveying interior details, such as angles. These have real-life meaning for a soldier. A doorway can offer shelter, or harbor mortal danger. A corner can spell safety, or ambush.

In Impressionist paintings, fruit on a plate exists in a void. I looked at the banal and mundane through the eyes of a soldier, painting as it was. My gaze was that of a voyeur, without taking a stand, just as light falls on a park bench the same way it does on a tank. The fruit remains the same.

Employing different techniques and styles, I continued to create several series within this larger theme.

The first depicted soldiers in the landscape, merging together the two main themes I had painted until this point. Next, I zoomed in to highlight a particular interaction between soldiers and civilians within a larger setting. This series was painted on burlap mounted on plywood; I wounded the fabric with a saw, etching violence into the painting itself.

At this juncture, I visited Italy and Israel. My first encounter with Italian Renaissance art in Italy itself left a deep impression on me. In particular, I was taken with paintings depicting multiple scenes on a single canvas. Later, when painting landscapes in Israel, I noted subtle, ominous changes in the villages around Jerusalem.
These observations came to inspire the third series, which depicted the continuity of village life amid the presence of soldiers. This time, I zoomed out to show events taking place simultaneously in the same place and painting.

The technique of depicting multiple scenes in the same painting lent itself to portraying complexities and fine details, and continued to serve me for several of my subsequent series on other subjects.

For the two years of my studies at Yale and another six in the US, I alternated between painting the soldiers and landscapes of my native land and experience.

During this period, I developed my method for gathering visual imagery from art history and historical resources. I researched each topic in depth, distilling the information to conceptual ideas and motifs, preparing preliminary studies, and only then painting. Four decades later, I still employ this method of working.
The distance that had been so difficult for me at first had become an advantage. I scrutinized both myself and my adoptive America with a foreigner’s eye.

For me, this period was one of study and reflection by painting; for my native Middle East, it was one of turbulence. As many artists before me, I painted with a sense of premonition, and watched my subjective observations become a troubled reality.

I was ready to move on. 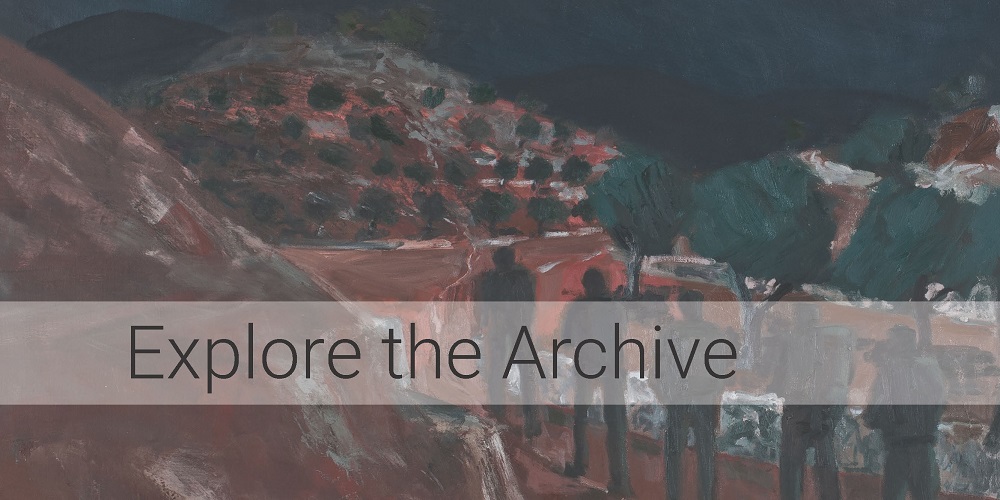 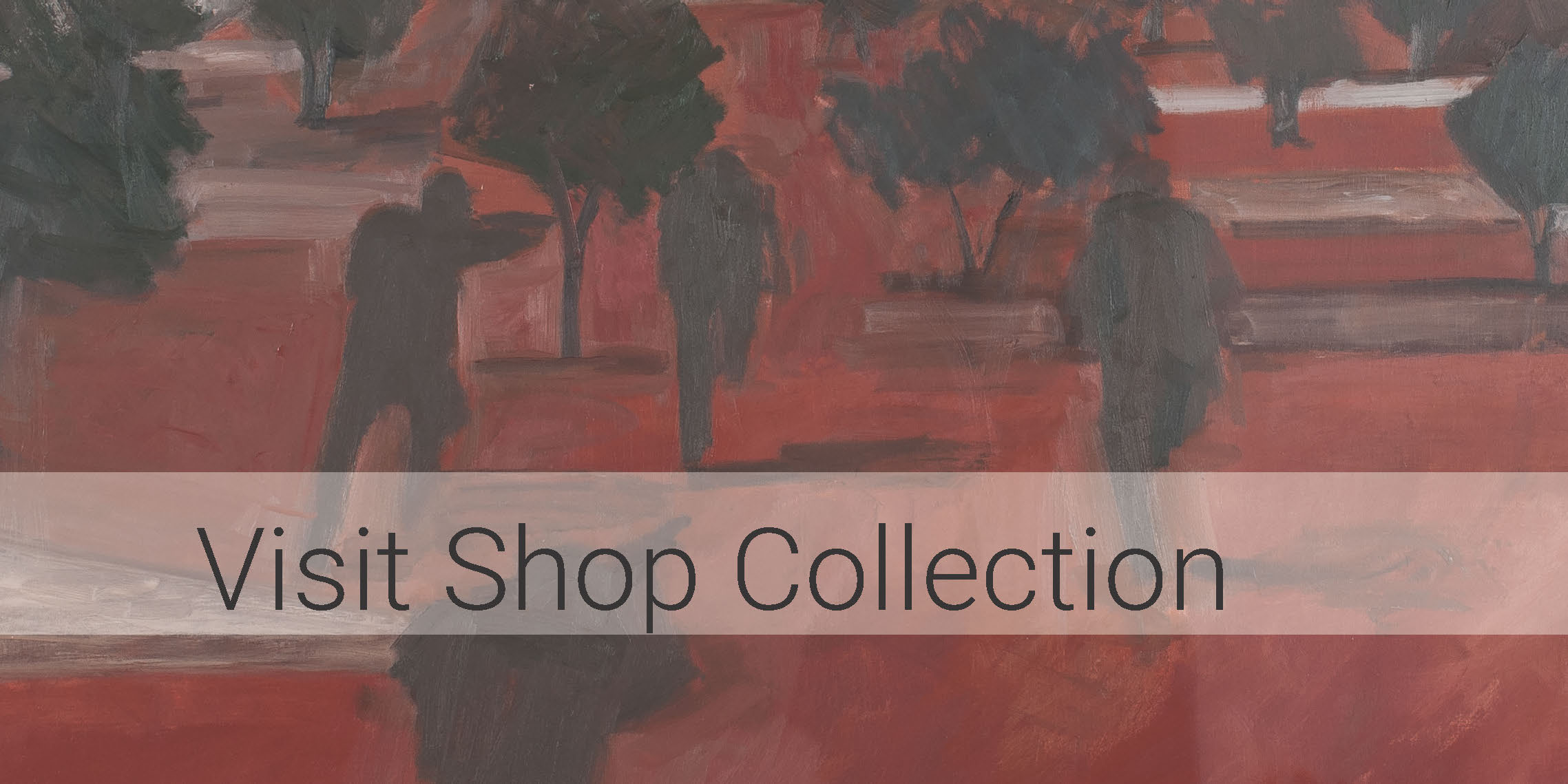