< Back to Historical Themes 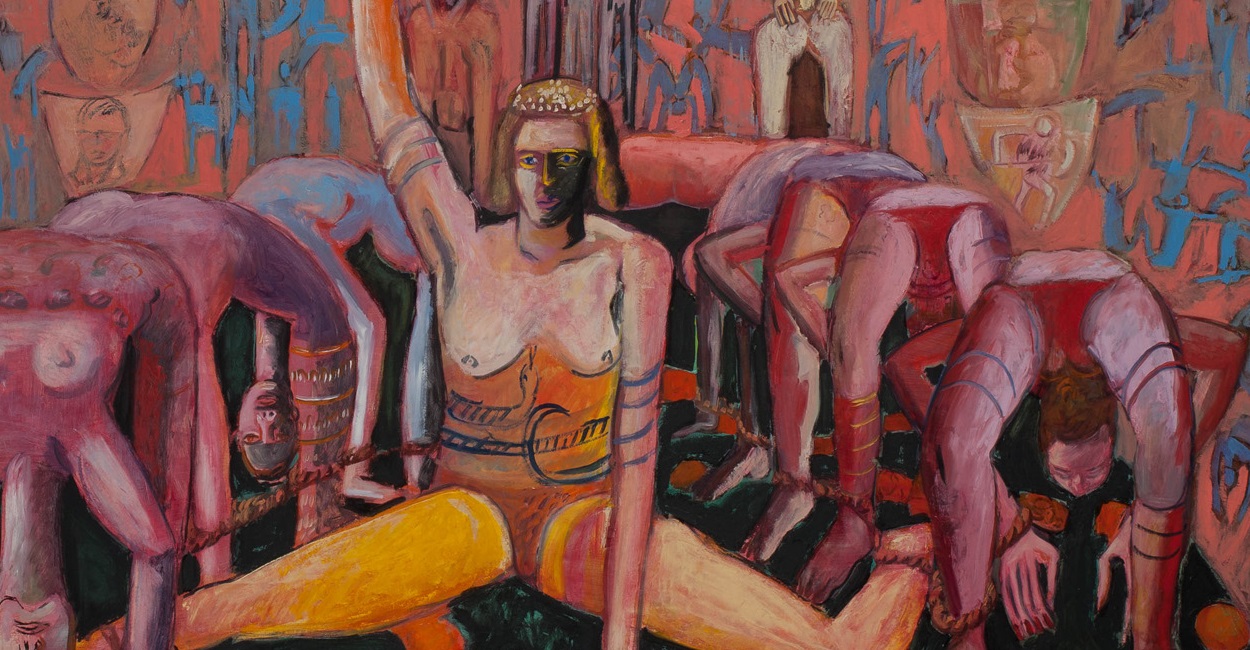 Ad Klot HaNeshima—To the Last Breath: 1988-1989
Born in Israel less than a decade after the Holocaust, I grew up among survivors and their children. Many struggled to find the words for the horrors they had witnessed and endured. Others yet struggled to listen.
In 1987, I saw Claude Lanzmann’s monumental film “Shoah”. Lanzmann had breached a longstanding silence on the topic in the sphere of public arts.
The film stirred me to approach this too.
This would be the first time I addressed an historic event, and a part of Jewish history that I had not experienced first-hand.
I travelled to Germany to contemplate the people, architecture, monuments and culture.
I studied hundreds of historic photographs in historical archives. At university art libraries, I pored over depictions of mass death throughout the history of art.
I did not want to imitate visual documents or historic portrayals—I studied them and learned from them.
I chose colors that were unearthly and deceivingly attractive, and focused on the symbols of the murderers and the victims; stadia and showers; cabarets and crematoria. The bodies of the victims took on the attitude of dancers, engaged in a communal dance with death, inspired by mediaeval European art and the depictions of the afterlife in ancient Near Eastern art.

Time shapes the way history is perceived. Born in Israel less than a decade after the Holocaust, I grew up among survivors and their children, although my own family had fled the war in time. Many struggled to find the words for the horrors they had witnessed and endured. I would address it through my art.

In 1987, I saw Claude Lanzmann’s monumental documentary film “Shoah”.
Decades after the Holocaust, a wealth of historical information existed; yet it was still largely absent from public and institutional discussion, and from the arts. Lanzmann breached a longstanding silence. The film stirred me.

One particularly striking feature of this work was that it did not use historical documentary footage. The film was composed of personal interviews that created a first-hand oral history, a narrative on screen. The technique was unusual for a visual medium.

The film used camera and color to break out of the confines of the ghetto, camps and documentary genre.
Most documentation until that point had been in black and white. For the first time, I saw the landscape of Poland in color, as it must have looked 45 years before. The wide scope of Lanzmann’s lens offered juxtaposition to scenes of the camps, the very image of closure and restriction. His camera swept the expanses of the Polish landscape and the detailed German cityscape, as if searching for answers.
This would be the first time I addressed an historic event, and a part of Jewish history that I had not experienced first-hand.
Still in the US for my studies, I turned to YIVO, the Institute for Jewish Research in New York- one of the only institutions housing archival material outside Israel’s Yad Vashem at the time. There, in the days before digitization, I studied hundreds of black and white photographs of the Holocaust.

At the Yale art library, I pored over depictions of mass death throughout history and art history. I did not try to imitate visual documents and historic portrayals. I too would have to search the landscapes and cityscapes to find my own answers.

I travelled to Germany to meet with the people, to see the architecture the Nazis had built and the art that they fashioned in their own image. I visited the arenas they built to glorify their ideology. The same culture that idolized perfection of the human body would also be the one to degrade and destroy it.

The railways captured my attention, as they criss-crossed the countryside with precision, flanked by industrial chimneys. The pattern they created was peculiarly pleasing and appealing. Both orderly and ordinary, their aesthetic was surprisingly seductive.
Upon returning home to paint, I had to build my visual language. I created dozens of preliminary studies, grappling with dilemmas of color, symbol and image.

Art usually shows the victor or victim in history. I strove to show both simultaneously. But how do I create a complex historical story on a single canvas?
I looked for a technique to merge the different components. Italian Renaissance painters often depicted multiple events in separate frames within one painting. I looked to more modern artists, such as Max Beckmann, who painted several events into a single integrated image.

The nudity of the victims posed a challenge. The bodies deserved dignity. At the same time, I wanted to convey the cruelty of stripping them of clothing and honor in their final moments. Nakedness seduces the eye, but the only obscenity I wished to depict was that of the perpetrators.

Vivid and bright colors served to lure the viewers into the world I painted, enticing them to look. The colors had to describe events that occurred on earth, but to connote the setting of hell.

I concentrated on the symbols of the murderers and victims; stadia and showers; cabarets and crematoria. The bodies took on the attitude of dancers.
For this, I drew on the Mediaeval tradition of the Danse Macabre (the Dance of Death), and the Massacre of the Innocents from the Gospel of Matthew, as painted by the Dutch masters.

As always, I also sought artistic elements from the Near Eastern cultures of my native region. For example, the concept of the Afterlife, a theme deeply rooted in ancient Egyptian belief and art. 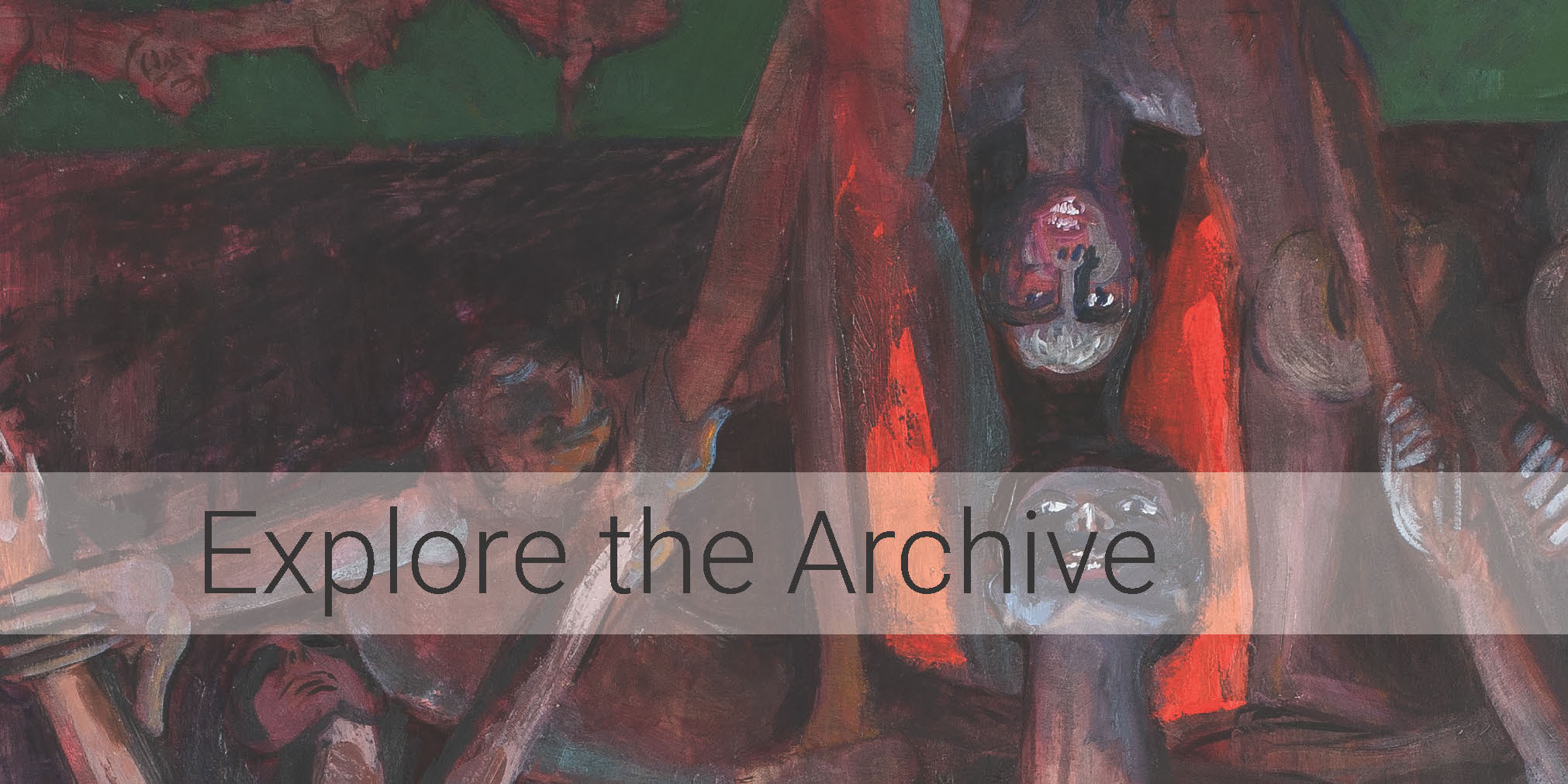